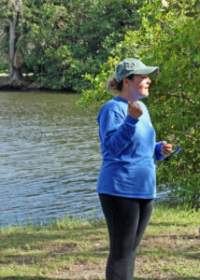 Over 75 sailors from Youth Sailing Foundation have been working with the Ocean Research & Conservation Association to build “living shorelines” in the Indian River Lagoon. Using fossilized shells to construct breakwaters parallel to the lagoon shoreline, the student sailors – 4th through 12th graders representing more than six area schools – are making real world physical improvements that will help preserve and improve the water quality of the Indian River Lagoon.

ORCA scientists are overseeing the project. The fossilized shells are mined west of Stuart, FL and transported to YSF’s facility at the Vero Beach Waste Water Treatment Plant, where ORCA volunteers use hand tools to break up the dump truck size clumps and fill mesh bags to create 60-lb “building blocks”. YSF volunteers and staff then load the bags onto their fleet of 19-ft sailboats and several workboats for transport to the site. Each breakwater takes about 100 bags; in total about 18 tons of shells will be used at the site.

The logistics of transporting this weight and volume in small boats is considerable, but the payoff is huge. By delivering the shells in small boats, placing them by hand in precisely determined locations, and building the breakwaters to exact specifications, the shoreline is left undisturbed and the reef-like structures will blossom into “living shorelines” in just a few months. 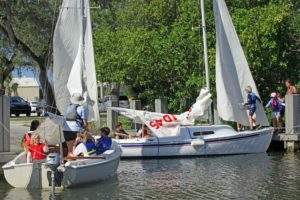 To accomplish this mission, YSF has mounted an amphibious operation that would make the US Navy proud. Weekday afternoons, launching five sailboats, two workboats, and three safety boats just south of the 17th Street Bridge, the fleet heads north to the MacWilliams Park boat ramp where they rendezvous with a group of 20 sailors transported from school by the YSF bus. After a briefing by an ORCA scientist, the sailors stow their gear and sail the boats, guided by US Sailing Certified instructors from YSF’s Varsity Sailing Team, to Otter Marsh, part of the Indian River Land Trust Bridge View Properties, about ¾ mile north of the Barber Bridge. Indian River County Sheriff and Sheriff Auxiliary boats escort the fleet and stand by the work site to prevent boaters from creating damaging wakes. 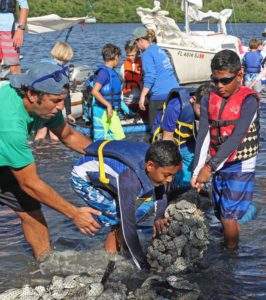 Once at the site the sailors disembark into the shallow water and begin the hands-on process of ferrying the bagged shells on floats from the boats to the staked location, carefully stacking them, much like bricks in a wall, under close supervision of ORCA personnel. Over multiple excursions, the students will have constructed over one hundred feet of living shoreline along this pristine stretch of the lagoon. 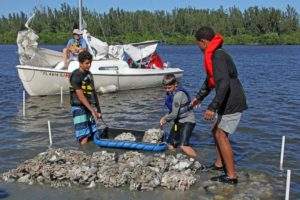 YSF’s involvement is just part of this long-term ORCA project, with nine additional sites permitted and waiting for construction. When complete, over eight hundred feet of breakwater will protect critical areas along this mile-long stretch of endangered shore line. YSF’s partnership with ORCA adds an important dimension to their instructional sailing program. While learning the principles and tactics of sailing, these students are also engaging in a hands-on physical activity contributing to the preservation the Indian River Lagoon. YSF is committed to instilling a sense of awareness and responsibility in its young sailors, encouraging them to become not just consumers, but good stewards of this vital natural resource.

There are no comments yet. Be the first to add a comment by using the form below.